Skip to content
Posted on 19 August, 201729 October, 2018 by B.I.G.
CLIMATE change due to global warming has impacted countries globally and Brunei Darussalam is no exception.
According to data collected by the Brunei Darussalam Meteorological Department, the Sultanate is getting wetter and warmer.
On average, Brunei’s maximum tempera-ture is going up by +0.3 degrees Celsius with mean temperature increasing by 0.6 degrees Celsius while the annual rainfall is showing a rising trend, with the mean rainfall increasing to 37.2mm.
The data recorded at the BIA Observational Station was revealed by Harnina Morani from the Meteorological Department in her presentation on Brunei’s climate during a parallel session of the 14th Southeast Asia Survey Congress (SEASC) 2017, held at The Rizqun International Hotel recently.
Showing charts and graphs of the increase in rainfall, Harnina Morani explained that the “recent trend shows significant increase in rainfall from January to April and slight increase from June to August. The months of January to April are getting wetter in recent years.
“The annual total rainfall is showing an increasing trend. There is a significant increase from 2006 to 2011 and the recent trend shows a mean rainfall of 37.2mm,” she said.
Meanwhile, she highlighted that Brunei was affected by strong El Nino years – 1982-1983, 1997-1998 and 2015-2016, while 2009-2010 was a moderate El Nino year. The maximum temperature tends to peak during El Nino years. 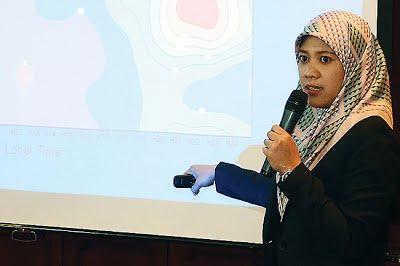 Harnina Morani from the Brunei Darussalam Meteorological Department
during her presentation
“Monthly maximum temperature has shown a slightly increasing trend during recent years (2013-2016), particularly from August to January. Monthly variation from the highest and lowest maximum temperature is about two degrees Celsius.”
Harnina Morani revealed that from 1978 to 2016, Brunei’s maximum temperature is warming by +0.3 degrees Celsius on average. The mean temperature from 1981 to 2013 shows that Brunei’s temperature is warming up by 0.6 degrees Celsius.
“This (data) shows that climate change is having an impact on Brunei as well,” she added.
Harnina Morani highlighted that in 2016 Brunei witnessed a weird weather pattern because of the El Nino phenomenon. The year saw the lowest ever rainfall recorded in the Sultanate at 1,900mm compared to the country’s annual rainfall of 3,000mm.
The monsoon season in the country has also seen a shift, she said. The northeast monsoon started at the end of December while the inter monsoon began in middle April and southwest monsoon started in late July until November.
“These calculations are based on data from a single station which represents Brunei,” she said, adding that “there is a need for more stations to give a better representation of Brunei Darussalam”.
Article & Photo Courtesy of Borneo Bulletin
https://borneobulletin.com.bn/brunei-getting-wetter-warmer